Two years after his mother died of breast cancer, and at just 17 years of age, Kennedy first discovered he had Nasopharynx cancer in 2014.  He lived on pain killers for a year, before a chemist in Nakuru suggested that he should contact Faraja to see how we could help

When Kennedy was asked  “What do you want to be when you grow up?” and he replied “I want to be a doctor and treat cancer patients.”

Kennedy first noticed that he had a swelling on his neck and visited Nakuru Provisional General Hospital. They removed the tumor but the biopsy results confirmed it was cancerous. 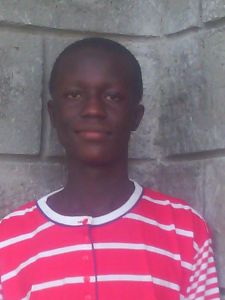 The news was devastating for young Kennedy especially because he was a freshman in Londiani boys High school and had a whole future ahead of him. At the time Kennedy was living with his Aunt, who was already struggling to make ends meet.  It was stressful situation as they knew they could not afford any further treatment.

“So I survived on pain killer from a nearby shop – for a year – but on that day when I went to get my usual dosage they asked me about my condition and I explained it. They told me about Faraja Cancer Support Trust and that’s when I decided to visit and seek help”

The Faraja team immediately understood Kennedy’s plight and arranged and paid for him to undergo treatment.  Faraja supported his radiotherapy and chemotherapy treatment at a total cost of Kshs 210,000.  He only has two more chemotherapies to go!

Coming to Faraja has made Kennedy look and feel more peaceful. When asked which services he enjoys most here his answer was, “Reiki, massage and breathing”

At a tender age of 17 years old, Kennedy has dreams that he holds onto and hopes that they will come to light one day. He wishes to become a doctor so that he can help ease the pain and the burden of cancer patients. He has a strong conviction that he will go back to school, as soon as he is done with the chemotherapies, and passionately strive and work on making his dream a reality.